Hibernian Media has announced film selections for their 8th Annual “Irish American Movie Hooley” which is scheduled this year for consecutive weekends at Classic Cinema’s Lake Theatre in Oak Park Sept. 16-18, and The Wilmette Theatre in Wilmette Sept. 23-25, 2022

Opening the Movie Hooley on Friday September 16th and Friday September 23rd will be EXTRA ORDINARY, which the New York Times called “A Reluctant Ghostbuster in Ireland. Maeve Higgins, Barry Ward. and Will Forte star in this supernatural comedy.” The film will screen at 8PM on Friday night at both theatres and audiences are invited to chat with writer-director Enda Loughman on opening night in Wilmette after the screening.

Saturday night, September 17 and 24th, will feature the 8PM screening of the black comedy REDEMPTION OF A ROGUE winner of Best Irish First Feature and Best Irish Film – at its world première during the Galway Film Fleadh. This might be the story of Ireland’s most prodigal son of all time! Writer-director Philip Doherty will join the Oak Park audience on opening night as well.

Finally on Sunday at 5PM, Sept. 18th and 25th, the Hooley will present the Irish American documentary, THE BOYS FROM KINGBRIDGE- from grammar school to ground zero, the uplifting story of how four lifelong friends from the same neighborhood in the Bronx lived through 911 at ground zero. The film portrays actual accounts, from four lifelong friends, who found themselves on the same block at The World Trade Center the day terror struck New York City. It tells firsthand what they saw, heard, felt, and did on that morning of September 11, 2001. Director Thom MacNamara will join the Oak Park audience for this premiere. 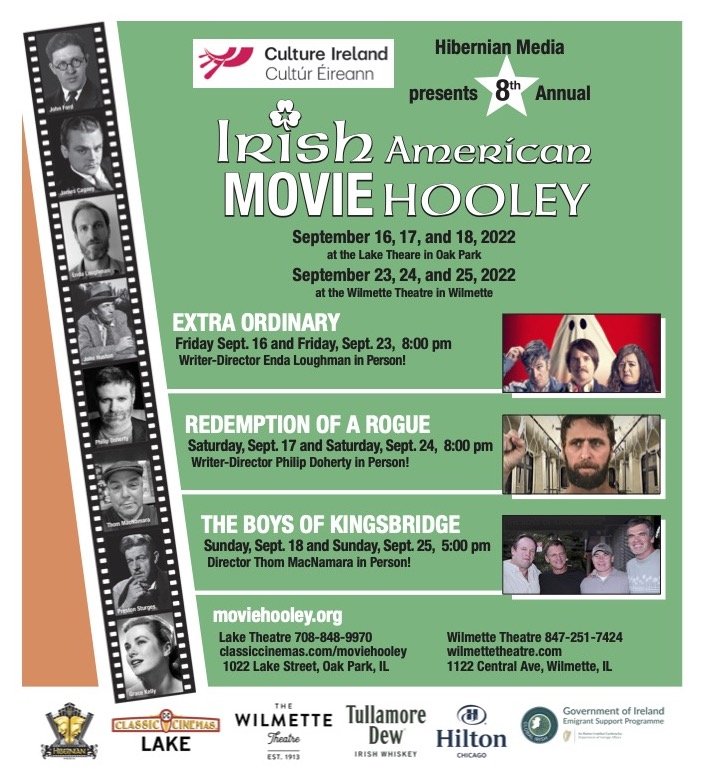 Running times of the films.

Special Thanks To The Following: